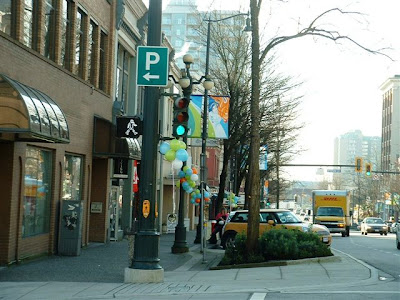 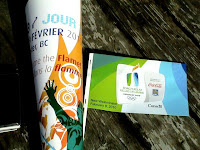 I was born in New Westminster so seeing the Olympic Flame here was a must. My mom Stella lived here when she passed away in July. This is my first Olympics with her as my heavenly angel. She was a terrific sports fan, and I hope she was watching the running of the torch with me.
New Westminster is the oldest city in Western Canada (1859), and the first capital of British Columbia. Nicknamed the Royal City, there is definitely a little tast of Britian here. And what apears to be a thriving wedding industry as well. But first the Brits. 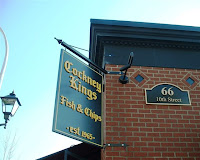 A few weeks ago I pointed out a fish and chip place in Steveston, and today I will point out a fab place for battered cod and halibut: The Cockney Kings. After spending the day at the Surrey Olympic Celebration site you might consider a casual lunch or dinner of delicious F&C on your way back to the city.  Get off the train at New West train station and walk about three minutes to the new plaza where the Kings have moved. (right by the IGA Plaza at Tenth.) Click here for reviews. 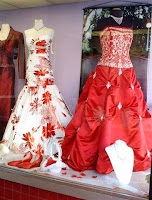 Historic Columbia Street is home to numerous bridal shops, tuxedo stores and other wedding related boutiques. Check out this display which is in the spirit of Canada hosting the 2010 Winter Olympics....It's like a Go Canada GO cheer...if the cheer was a bridesmaid dress.
The rest of the street was also decked out in red and white, and I saw Army & Navy has a good selection of Canada gear for sale in the window. Army & Navy is a Vancouver institution (there is also one on East Hastings Street) as far as discount stores go, and their yearly shoe sale is legendary.
Columbia Street has diagonal parking...just like main streets in so many other smaller towns. It also has a good amount of old buildings, well, old by Canada standards. Remember we are only 124 years old :o)

The walk along the waterfront heading to New Westminster Quay is lovely. More new condos and trendy studio/loft- like developments are dotting the downtown/ water front core, as people look to New West as a more affordable option for home buying in the lower mainland.
Queens Park (a popular spot for weddings) hosted several thousand Olympic enthusiasts Tuesday as they welcomed the Flame to New Westminster. It's the biggest park in New West, and a really beauty, too.
For more city information, please visit http://www.newwestcity.ca/
Posted by L.A. Ovens at 10:02 PM