My First Two Days at the 2010 Winter Olympics, Security Screenings and All!

My Good Deed: 5:00 PM Friday One hour before the opening Ceremony, I was buying pillows, blankets, towels and soap for a family of Olympic vacationers that checked into an under- equipped condo rental. Not quite what I was expecting to do at that time, but I was very happy to help them out. (Edit...I was just the personal shopping assistant, it wasn't my money paying for the supplies!)

5:30 PM Friday: walked through the blocks surrounding BC Place, site of the Opening Ceremony. The energy on the streets was amazing. At one point I had to walk through some protesters. I didn't blend in. 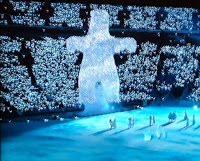 OPENING CEREMONY Arrived at my viewing post: sofa at cousin’s. As the ceremony went on I was surprised to see several ideas from my "If I was Producing the Ceremony" production list actually happened! Loved the production, especially the water, tree, mountain and spirit bear visuals. It all looked like home to me. I felt very proud for the Four Host Nations. Their welcome was stunning and the dance performance was fantastic! 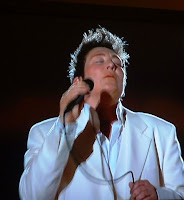 Emotional during KD Lang’s performance: Hallelujah was played at my mother’s memorial service. She loved that song.
Still not sure about the spoken word segment, but it was very close to my “standup comedy” idea on my ceremony production list.
My cousin Jen predicts Celine Dion will perform My Heart Will Go On at the Closing Ceremony.

Heavily sighed for the director and the torch bearers when the fourth “log” of the interior Caldron didn’t deploy. 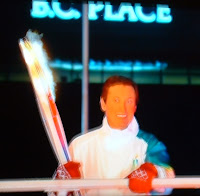 Felt lonely for the Great One ( Wayne Gretzky) riding in the back of the pick up truck all by himself...too bad Bobby Orr couldn’t have went along for the ride.
Boy the media sure is important: They get the outside caldron close to their International Broadcast Centre. When you think about it, this is pretty silly. With so much is happening along the shores of False Creek: BC Place, Canada Hockey Place, a gaggle of hospitality houses, the Athlete's Village, they couldn't find a spot there? (The media was also in mind when VANOC selected the snow challenged Cyrpress Mountain because they'd get pretty visuals of the city and the ocean from up there. That's the extent of what John Furlong said the other day.)

Saturday Woke up too early, but had to get up. Packed up my “game gear” and headed downtown. Went to my friend Andrew’s: KD Lang’s performance from the night before is on the TV. I feel warm and happy to hear it again. Andrew is producing a documentary titled With Glowing Hearts so I tagged along with him on a brief shoot. Got to carry some audio equipment, launching me to production assistant status for 10 minutes.

Went to super cute, outdoor coffee cabin next to CBC Studios (it has a living roof and a pitcher of water and glasses on the counter at the ready for non coffee drinkers like me!) Saw the boys from Hockey Night in Canada’s Satellite Hotstove segment on stools talking hockey for the cameras.

Was lucky to attend the opening hockey game at Canada Hockey Place. Uh oh...time for a tiny rant.

Andrew and I walked to the east side line up for security screening and the line up was long. We headed over to the West side which wasn't as busy, but it was slow moving. Found out my small, fun fur backpack was too large for the express line. When asked what size a small bag is, I was told "like the size of a loaf of bread." Huh?  Anyway, I saw five screening tents available, and at 4:20pm they only had two tents open for screening. The game was starting at 5pm. Sure, the number of ticket holders is significantly smaller than for a BC Place event, but come on VANOC...you have five tents, use all five tents at the same time, everytime.

VANOC, don't you realize the longer the fans are waiting in line, the less money they are spending inside the venue?!!! End tiny rant.

Please note hockey fans attending games at Canada Hockey Place: There are only two entrances being used before games and two exits:

Entrances:  Eastside check point and security line up appears at Abbott and Keefer Street. West side appears  near Nelson and Beatty street in a parking lot next to BC Place. This is also where the Will Call Ticket Booth is.

After going through the Westside Check point, the walk to Canada Hockey Place was a long one, involving four relatively long flights of stairs and overhead walkways at various points.

Exits: Only two exit routes are used after the game; everyone leaves via the exit doors on the 300 level, closest to both Georgia St. and Dunsmuir St. viaducts, your  east and west exit routes into the city.

During the game: With new Coca Cola displays everywhere, various other temporary walls installed, the concourse becomes a little more crowded than at a Canucks game. The Canucks Team store is now like a mini Olympic superstore/  Team Canada store which looks great! Plus there are also various international items available for other teams in the tournaments.

Smokers will be happy: I guess due to IOC rules, smoking is permitted outside on certain patios (smoking has been banned on patios at Canucks games, and all other events at the venue for the last two seasons)

The Canada / Slovakia women's hockey game deserves its own column to I'll stop this one here.
Posted by L.A. Ovens at 11:27 AM