Her Story: A Trio of Women Hockey Writers Discuss the Winter Olympics

I’ve been blazing the Hockey and High Heels trail for over six years now, and on that path I have been lucky to meet some remarkable women along the way. Last week I decided to hit up three of them (all hockey writers) and ask them to share with me their thoughts and feelings about the Winter Olympics.

I would like to introduce you to Jan Snyder, Leslie Silvey and Dee Karl. These three women have also been blazing their own trails covering NHL hockey in their markets. And at times, they've helped fill the gap when local sports media wasn’t giving hockey the attention it deserves.

Jan Snyder...Many of you may already be familiar with Jan Snyder. Jan has been an important contributor to Lisa’s Lounge at Hockeyandhighheels.com since 2006. She has written for numerous publications in Pittsburgh and Houston where she currently resides. Jan’s work on a hockey lifestyle piece for h&hh.com received national attention on Fox Sports during a Penguins broadcast. She has interviewed hockey celebrities including HNIC’s Scott Morrison, NHL referee Kevin Pollock, and long time AHL, WHL and NHL hockey coach, Kevin Constantine.

Jan Snyder puts it all into perspective...

Hi Lisa, First, I have to say that I’m delighted to be included with all of the other female hockey writers! Very nice company to be keeping. Here are the answers to your questions:

1. How do you watch Olympic hockey, do you do anything special?

I can’t say that I do anything special during the games, other than be constantly amazed at how players who are bitter rivals on their NHL teams suddenly bond with countrymen to produce fantastic hockey games. After the games end, I need Kleenex – I’m a sucker for anthems – any country, even if I don’t know where it is, when I hear that anthem, it gets to me and I cry. But when it’s USA that has won a medal, the tears are more tears of joy and my heart bursts with pride at the accomplishments of our dedicated athletes.

2. Do you have a fave Olympic Hockey Moment?

“And I’m proud to be an American….” Of course, my fave Olympic moment was the 1980 USA Miracle Team. The movie portrayed the whole story so well. If you lived through it, you remember the politics and how the Big Red Machine stood for more than just a hockey team. But beyond that, I wasn’t a hockey fan at the time. That Olympic tournament turned me into a fan of the game I love today. The speed, heart and determination of all the players were amazing and left me wanting for more after the Olympics ended. I went to my first Penguin game shortly thereafter. I just about had my pick of any seat in Mellon Arena because the Pens were “cellar dwellers” back then and nobody was going to the games. Watching games in person was even better than the Olympics! I was hooked, no doubt. In a moment of wonderful serendipity, the Pens drafted the Big French Canadian, #66, Mario Lemieux, in 1984 – and the rest, as they say, is history. Now he is the owner, the savior, the everything to Pittsburgh Penguin hockey. And he’s the reason my cat is named Mario LaMew.

3. What is your fave non hockey winter Olympic sport?

Because I like Winter Olympics better than Summer Olympics, I have two other favorites. I love to watch the luge competition! Oh, what fun that must be to fly through that tunneled course at such high rates of speed. I’d love to try it once. I guess it goes back to childhood when we had plenty of snow-covered hills for sledding in Pittsburgh. Three of us would pile on a sled and fly down the hill, laughing all the way. My second favorite is the ski jump competition. I think that must be the closest thing to flying that we have as humans. I wouldn’t even have the guts to climb to the top of the jump, let alone travel down so far suspended in the air! The skiers make it look so easy and they are so graceful. I envy them, but I don’t want to even try that sport.

Good luck to all the USA athletes and the Canadian athletes. I’m afraid the whole event will go by so fast – let’s all enjoy.

Leslie Silvey’s hockey blog caught the attention of Washington Capital’s owner Ted Leonsis, and it wasn't long before Leslie became more involved with covering the team and rising star, Alexander Ovechkin. Last year the Capitals launched Club Scarlet, the first NHL team website spin off dedicated to producing content with the female fan in mind, and Leslie has been a featured blogger there ever since. When she’s not working at her day job in marketing or driving one of her twins to or from travel hockey practices or games, Leslie shares her passion for the Washington Capitals and the great game of hockey on Musings of a Hockey Mom and Scarlet Caps.com. 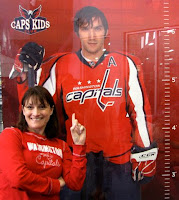 Leslie Silvey...Hockey Mom Counts Down to the 2010 Winter Olympics

When Lisa Ovens asked me to weigh in on the upcoming Winter Olympics in Vancouver, I was more than thrilled to share my excitement! I am also looking forward to keeping up with all the Olympic hockey happenings as Lisa reports all the historic action as only she can when the global games come to her hometown.

How do you watch Olympic hockey?

To be honest, I just caught the hockey fever a few years ago, so we don’t really have any traditions established (yet). As my beloved Washington Capitals have five players (Alexander Ovechkin, Alexander Semin, Semyon Varlamov, Tomas Fleischmann and Nicklas Backstrom) playing for their respective countries, we will all be wearing Capitals red when watching Olympic hockey to symbolize our support for all of our players. I also plan to have several cowbells on hand as we cheer on our teams, as the cowbell has become a huge fan accessory at Capitals’ home games. And of course, lots of hot chocolate with marshmallows and whipped cream…just because.

We are already counting down to the opening ceremony, which happens to take place on my twin boys’ 14th birthday. So we’ll be having a big party to celebrate both momentous occasions!

Do you have a favorite Olympic hockey moment?

As I always tend to root for the underdog, of course I have to say “Miracle on Ice.” We’ll probably never see anything like that again in our lifetime!

What is your favorite non-hockey Winter Olympic sport?

I absolutely love the figure skating! I spend lots of time at the rink and get to see figure skaters practice in the wee hours of the morning – the hard work and athleticism that goes into making it all look so effortless is nothing short of amazing. And my boys have really gotten me into snowboarding - I am a huge fan of USA snowboarder, Sean White. Now I am the worst skier in the history of snow-making, so I am in complete awe of those guys and gals soaring through the air while doing triple flips and landing on a dime!

But I really can’t wait to see the incredible lineup of the best hockey players in the world show their stuff on the global stage.

Then there is Dee Karl on Long Island, New York. Dee’s passion for Islander’s hockey attracted a following with her blog, the Seventh Woman. Eventually she earned a spot in the press box at Nassau Veteran's Memorial Coliseum, home of the New York Islanders. Recently Dee went on her first road trip with the team to cover a game with the Philadelphia Flyers (her tweets enroute were hilarious!). Dee is also a New York Islanders beat writer at hockeybuzz.com.

Olympics? That wonderful bi-annual time when the whole world comes together under the guise of sportsmanship. The pageantry, the drama, the peek into a country I know I will never see. The heartwarming stories of young athletes and their road to international competition as presented by one of the major TV networks. I’ve been hooked since I was a kid.

As a hockey fan, the summer Olympics never really excited me. I do watch, perhaps half-heartedly. But that 4th year, when the Winter Olympics roll around is when I really get excited. It doesn’t matter if the coverage is not live because of time zone. I don’t even care if I actually already know who won the medals because of it. I still watch in wonder.

I also use the broadcasts as an excuse to blend my love of the games with my love of -- believe it or not -- food. Yep. What an excuse to go searching for recipes indigenous to the host country to serve while I’m also watching the downhill skiing, snowboarding or the elegant figure skating competitions.

I actually catered an Olympic dinner party years ago complete with items from various countries and fake gold medals while the guests entertained themselves with bizarre cocktail games. Sadly, I couldn’t bring an Olympic torch to use to heat anything due to fire code restrictions. (It really would have made a perfect Fondue sterno.) One year, when my daughter was much younger, we had a calendar that listed all the Olympic events!

I'd Like to thank Jan, Leslie and Dee for sharing their Winter Olympic stories with me, and with all of you. Ladies, I wish you all could be here in Vancouver with me during the Olympics. Now wouldn't that be a story? There's always Sochi 2014...
Posted by L.A. Ovens at 1:38 AM

Alex continues to amaze me. His combination of power, speed, and skill reminds me of the promise Eric Lindros had in his early days. If he can stay healthy, he could challenge Gretzky's career goals record.