Late last night I saw a few TV commercials advertising the Richmond O Zone; the Olympic Fun For the Whole Family party site celebrating the Winter Games. Richmond is home to the Long Track Speed Skating Oval as well, giving Richmond its Venue City Status (I received the above Olympic pin at the Oval's Grand Opening Weekend celebration in December 2008.)

The O Zone is definitely a must see attraction for locals and visitors revelling in the Olympic games. Outdoor skating, live concerts, Ice sculpture artists including an Ice Arts competition, Holland Heineken House, the BCLC Winter Games Dome filled with interactive activity, BC Street, fireworks, an International Living Room, Torch Relay celebration (the torch hits the O Zone on February 9th),  The Minoru Seniors Society Comfort Zone, food beverages and even more entertainment. The O Zone organizing committee have thought of everything and every age group when putting this project together and my hat is off to them. I have a feeling O Zone enthusiasts will need a few days to experience it all.

Here is the link to the O Zone website's programming page to learn more about everything O Zone!

But there is more to the City of Richmond, and the following is my take:

The city of Richmond is considered Vancouver’s original suburban neighborhood. And for many years, if we wanted to shop at Ikea, Richmond was the area we had to go to for our Billy shelving units, bags of tea lights and salvos of Glog.
Richmond is surrounded by a few arms of the Fraser River, and the Pacific Ocean. And where the Richmond Olympic Oval is built, well you can’t get any closer to sea level than that (How often are the  Winter Olympics staged at sea level? ) Richmond is built on a river delta, so one thing you won’t find there are underground basements. The Oval is only nine miles (14 km) from Downtown Vancouver.

Richmond is home to Vancouver’s International Airport, and like a lot of Vancouverites, I view Richmond as a gateway to my travel dreams. I for one also visit Richmond just because the scenery is quite different that the rest of Vancouver. It’s a nice change of pace. Richmond is also is the sunniest place in the Lower Mainland, so this is my destination for the rays and a place to watch the sun go down long after it’s gone down elsewhere in Vancouver. 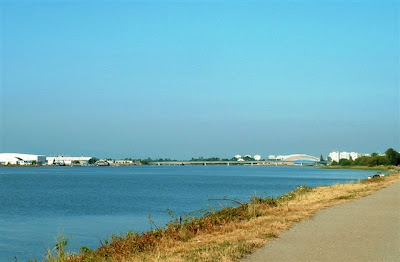 View of the Olympic Oval from the Middle Arm Trail. The Oval is the

rounded roof building on the right side of the bridge. Buildings on the

The cool thing about the location of the Olympic Oval is that it’s on a walking/ biking path that runs along the west (ocean side) of Richmond, with views of the Airport, the ocean, Vancouver Island and the Gulf Islands. People who have a long stop over at YVR (the airport) could easily take a short cab right to see the Oval, and then walk along the path and enjoy the views. The path leads to the historical fishing village of Steveston, a cute little place full of restaurants, treats, arts and culture. This is about a 12 km walk from the Oval, so depending on the weather in February, Olympic tourists looking for fresh air, exercise and some fish & chips might include a walking trip to Steveston in their speed skating spectating plans.

I mention fish & chips because I often have them at Pajo’s at Garry Point Park in Steveston. But not until I ride my bike to the Oval and back! I have never had a bad piece of halibut there, and some how I manage to avoid the long line ups. During the winter Pajo’s only opens when the weather is good, and like they say on their website: if it looks like a day you could enjoy eating fish and chips outside, then they will most likely be open. Another thing Pajo’s does that’s kind of cool: if it’s your birthday, your meal is free (details on their website).

Middle Arm Trail Map
-the Olympic Speed Skating Oval is located close to the southend of the Number 2 Road Bridge (where the blue P sign is on the map. Click on map to enlarge

West Dyke Trail Map to Steveston
-wild life to see: ducks, turtles and get up close to some domesticated cattle along the trail (there is actually a cattle crossing along the trail!) Click on Map to enlarge

Hey Lisa! Stumbled across your blog while doing some searching for US Speedskating (I'm helping with their social media promotions). We just did a video with our athletes yesterday where we asked them what they thought about the Richmond Olympic Oval, so I thought you might be interested in checking it out...

Thanks for stopping by 2010 and High Heels. I enjoyed the video and will post it on the blog shortly. Good candid interviews.
Thanks for the suggestion! Let us know if you will be visiting Vancouver for the Olympics