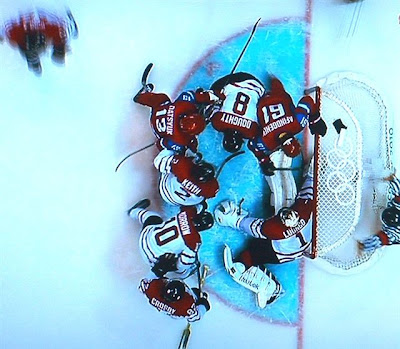 Today is going down in Canadian History as Wonderful Wednesday: four medals, and a much needed win for Team Canada in Men's Hockey. It wasn't just a win, but a win over Team Russia. This game was the subject of many conversations, even before Canada beat the Germans. I have to say on my Olympic travels today, leading up to the game, the feeling about the city was calmer than I expected. That was a good sign.

Everyone should be happy to see certain players step up their game (Boyle, Perry, Getzlaf). With seven goals and plenty of CDN players chipping in, well, that's what I was my hoping for Tuesday night before sleep. I thoiught the game would be a closer affair, but I'll take the 7-3 win, and say see you in Sochi 2014, Team Russia!

I think some people are wondering where Sidney Crosby is, and well, I am hoping he's saving up some amazing moves for the Semi's (and hopefully the Gold Medal game), especially for those moments when we need him the most.

And there will be those moments. 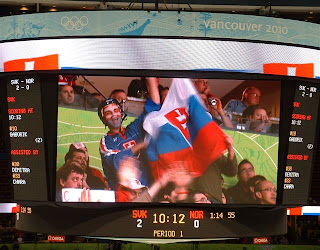 And speaking of Tuesday night, I went to the late game featuring Norway and Slovakia, and that too was an exciting game. Norway, not exactly known for hockey, but hangs in there nonetheless, was so hungry for the win, and they really kept Slovakia on their toes. Both teams were well represented in the crowd, with the rest of us chiming in on the cheering. However, Norway really seemed to win over the neutral fans and I think they found a little place in our hearts. In the end Slovakia would be the team moving on to the Quarter Finals, final score 4-3.

There was a moment of drama as Slovakian player, Lubos Bartecko took an elbow and hit the ice, sustaining a serious head injury. I could not believe the speed at which his helmet travelled as he was hit. This is yet another reminder about keeping the chin strap tight on your helmet. I hear he is doing okay, and I hope for a speedy recovery for the guy.
Posted by L.A. Ovens at 11:20 PM