The Life of Ice at the Olympic Level: Ice Hockey 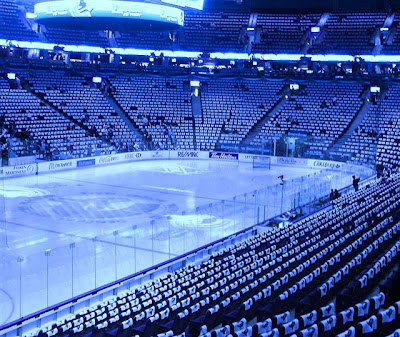 Canada Hockey Place (dressed up for Canucks though)    Lisa Ovens

In my first hockey book I wrote about hockey’s playing surface compared to the "fields" other team sports. The bottom line: there isn’t another playing surface as glorious as a sheet of ice. And there probably isn’t a surface requiring more attention, equipment and expertise than ice.

I sometimes think of ice as the seventh player on a hockey team. When the ice is great it helps the team, and when the ice sucks, well all kinds of quirky things can happen. 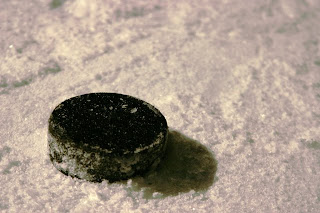 Good, hard ice improves a player’s speed while skating. Good, hard ice and hockey pucks are a terrific marriage: pucks passed and shot on good ice often go where the player intended it to go.

Have you ever skated on bad ice? Maybe your strides were sluggish or you fell down because your skate was caught in a crevice. I’m sure a tiny medical journal could be written on injuries to professional hockey players caused by the ice alone.

I remember reading an article somewhere about the ice at Canada Hockey Place in Vancouver (But it was about the Canucks, so at the time it was about GM Place; I will go through my mess of mags to find this article!) a few years ago and how arena operations took the ice maintenance to a higher level (think microbiology). It was discovered that Vancouver’s water was too pure to create a good, hard sheet of ice. So chemical testing was done on water used for freezing at other arenas known for great ice. Because of that testing, a formula was created to add to the water for freezing in Vancouver’s arena. Basically they made the water “dirtier” and the ice became harder. I have had the opportunity to skate on the ice at Canada Hockey Place many times over the years, and let me tell you, it is fantastically smooth and great for gliding!

The rink at Canada Hockey Place will see a lot of action during the 2010 Winter Olympic Ice Hockey tournaments, and thankfully, the men and women hockey players won’t have to be concerned about other events like concerts happening between Feb. 13th and Feb. 28th, 2010. Converting an arena to a concert venue can affect the ice because of beer and cola spills trickling through the floor boards. People, please remember that when your grooving and shaking it at a Beyonce show during hockey season!

Did You Know...Hockey Pucks are frozen for play. A small fridge is located in the penalty box of Canada Hockey Place. Pucks perform better when frozen.The average hockey game can see anywhere from 20-40 pucks used.
Posted by L.A. Ovens at 5:53 PM