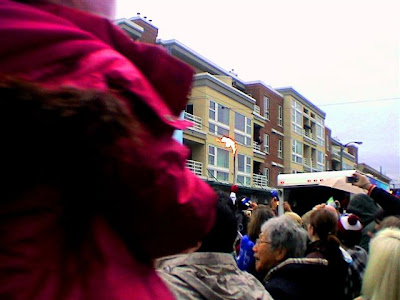 Okay, I’m sure many out of town 2010 and High Heels readers are wondering where is Kerrisdale and what does this mean? Well the worldwide Hockey & High Heels headquarters is located in Kerrisdale! The Olympic Torch Relay will ran through my neighborhood late afternoon on Thursday February 11th. The streets were crowded. As you can see I didn't get a good position to take a photo (took me a little while to get back here from the Linden torch run). 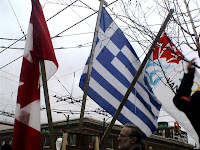 I did like this flag display located at West Boulevard and West 41st Avenue intersection. We have a Canada flag, a Greece flag, and a blast from the past: the Vancouver Candidate City logo flag.

About Kerrisdale... I noticed that the Olympic Edition of the Tourism Vancouver guide failed to mention the Village of Kerrisdale in the editorial section describing Vancouver neighborhoods, I figured I would do everyone a favor and gush about my hood here. For starters Kerrisdale was named after a Scottish town named Kerry Dale which means “the seats of fairies”- I was meant to live here :o)

For the history portion...my beautiful Aunty Donetta was crowned Miss Kerrisdale 1949! The city of Vancouver’s first ever rock and roll concert happened at the legendary Kerrisdale Arena in 1956: the band...Bill Haley and the Comets. Kerrisdale Arena also played host to many other shows establishing it as a kick ass smaller venue for touring bands in the 60’s 70’s and early 80’s. Bands like the Yardbirds, Frank Zappa, Devo, Motorhead and the Clash blew off the roof of the hockey arena. Actually it would be the Motorhead show that ended the live rock fun because the concert was so loud and it attracted a pretty hardcore, hard partying crowd to the tony neighborhood.

2010 Olympic enthusiasts that might be looking for a break from the insanity that will be downtown Vancouver and the Richmond Ozone might consider visiting Kerrisdale. It’s about half way between downtown Vancouver and Richmond and it is easy to get to. It’s on the 41 bus route (heading west, it goes to UBC, site for Olympic Hockey) which stops at the Oakridge Canada Line stop. You can also hop on the number 16 Arbutus bus from downtown and it will bring you right into the heart of Kerrisdale.

Considered one of North America’s most affluent neighborhoods, Kerrisdale boasts a fine little intersection of specialty shops, restaurants and services. It is also home to one of my favorite cupcakes: The Happy Cupcake, found only at Bean Brother’s Café. It’s a good old fashioned cupcake, and it’s cheerful as can be. It  feels like it weighs about a pound so it will last a couple of days, too (I’ve never attempted eating a whole one in one sitting). Yes as you can see in the photo, it’s so big it can’t stand up by itself like the other popular cupcakes in this city (Cupcakes by Lori, Big City Cupcakes, Butter) At $3.95...it’s a pretty good value.

If you like burgers and shakes, try them out at the Red Onion, a Kerrisdale institution that often makes the “Top Burger lists". If tea is your thing then hit the Secret Garden Tea Company. And then shop till you drop at Hills of Kerrisdale if Juicy Couture and Michael Kors are your thing. There’s a British style pub, The Cheshire Cheese Inn, the local watering hole for sports on the tube.

The Kerrisdale Community Centre will have a “living room” set up for everything Olympics and will be a comfy gathering place for all neighbors to hang out.

And who knows...you just might see me hovering around the Happy Cupcakes!
Posted by L.A. Ovens at 10:16 PM