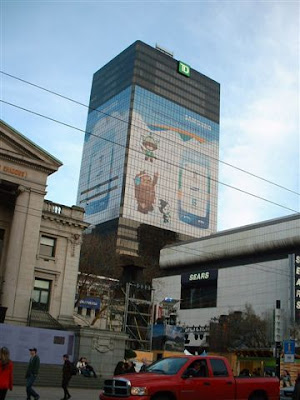 Robson and Howe: a scaffold, pylon and yellow tape zone
I haven’t had any kind of a countdown around here until now, so welcome to the Official Beginning of the 2010 and High Heels Countdown to the Winter Games.
My day began with some good news: today’s column titled Her Story: A Trio of Women Hockey Writers Discuss the Winter Olympics made it to tedstake.com! That’s right, the owner of the Washington Capitals, Ted Leonsis provided his readers with a link to 2010 and High Heels along with his comment “...a good blog post.”  tedstake.com

I headed downtown to check on the city: plenty of hubbub as crews work to finish their projects. I spent some time at Canada’s Northern House. Within a few minutes I was interviewed by NBC London. She asked me about the mood of the city, whether there was a buzz yet. I said we’re not quite there yet because Vancouver is a last minute kind of city. We’ll show up next week! 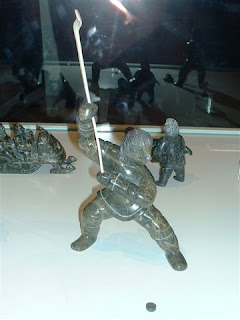 "Slap Shot Hockey" by Isaaci Itidloie of Cape Dorset, Nunavut
Canada's Northern House is filled with treasures and a must see, especially for locals. There is a contest to enter inside the house, with three amazing prizes (a gold nugget, a diamond and a beautiful tapestry) 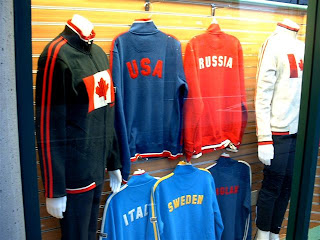 Heading home I discovered a new donut at Tim Horton’s:  “The Canada Donut” looks great, but bad for my pre Olympic health plan. Passed by the Running Room (1578 West Broadway) and noticed they have some great Olympic inspired jackets in the window. These are a great alternative to the usual suspects in Olympic street wear. 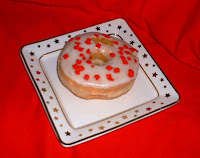 Now what does Day Eight hold in store for me?