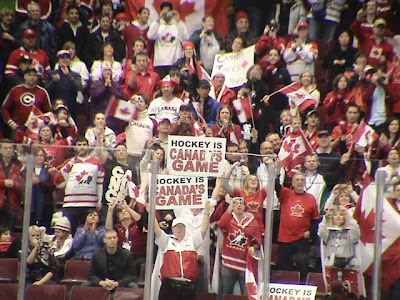 If anything, Thursday night's shootout victory for Team Canada should help the team realize a little adversity now is going to be good for them in the long run. It's going to take time for the team to gel, and a victory like this one should help speed up the process. And if we come up against another hot goal tender, like we did tonight with Switzerland's  Jonas Hiller, well the boys will just have to be that much hotter.

I can't tell you how great it is to see Sidney Crosby on our side! After several years of watching Sid the Kid highlights packages, catching some of his games with the Pittsburgh Penguins, and reading columnist Jan Snyder's reports on the guy, I real feel like he's one of my guys now...and he came through when we needed it the most. I called Jan after the game and she commented on the high stick Crosby received in the third... " He's not the one you want to make bleed. That makes him very angry and he raises his game."

I have a friend who's been enjoying the views from the Premier Lounge on level 500 of Canada Hockey Place, and he said tonight the lounge was actually alive for once...every other game the loungers have been on the reserved side. Come on Premier Loungers...this is freakin' Olympic Hockey...it's only going to get more tense with each game...cheering, celebrating and reacting will help ease the stress!

I missed the entire Russia /Slovakia game, save for the shoot out and all I have to say is...Pavel Demitra, this Canuck fan wants to see you score like that every game when the NHL season resumes!
Posted by L.A. Ovens at 1:22 AM