The Life of Ice at the Olympic Level: Speed Skating 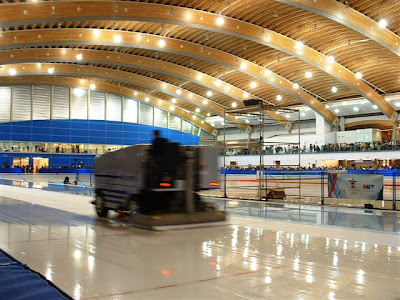 I wonder if Stephen Colbert has muttered this yet... “Those freakin’ Canadian Ice Holes and their crappy ice scraping machines...”

Geez, are we a bunch of “Iceholes” here in Vancouver or what. We built an Olympic speed skating oval a few feet from the water and our Canadian ice re-surfacing machine brand isn't cutting the mustard! As I wrote in the previous "The Life of Ice" article about hockey, there probably isn’t a sporting surface requiring more attention, equipment and expertise than ice.

And now the world know this, thanks to the troubles at the Richmond Olympic Oval, home to Olympic Speedskating during the 2010 Winter Olympics in Vancouver. Re-surfacing isn't the only variable affecting the ice: a packed house, hot lights, humidity in the air are also contributing to what some skaters are calling "slow ice". We can't change the humidity, but we can change one piece of equipment...


Californian built Zamboni to the Rescue!

I was surprised to learn this earlier today; a Zamboni from the Oval in Calgary was in transit to Vancouver and was expected to be in service for Wednesday's speedskating events. I guess what surprised me was that VANOC didn't have this speed skating oval friendly machine waiting in the wings last week.
After all, the oval's ice surface would cover approximately six international hockey ice sheets, it would only make sense to have the Winter Games supply cupboard stocked full of Zambonis.

Speaking of Zambonis, I think now is a great time to give readers a sneak peek at my latest book, Living Hockey. Here is an excerpt about zambonis taken from a chapter that examines hockey in California...

Destined to be a hit, by name alone, this marvel of ice technology was invented during the Forties by a man named, Frank J. Zamboni. He owned a very large ice rink in Southern California, aptly named Iceland, and in the name of efficiency, he created a vehicle that could drive onto the ice, scrape off a layer of tired old, carved up ice, and then spray hot water to smooth out the surface, filling any crevices in a valuable, time saving fashion.


Frank was an inventor, an innovator, with refrigeration in his blood. Quite often, those of us born in the age of Stainless Steele Sub Zeros have no clue what time was like before we existed, and heck, there was a lot of stuff to try for the first time, and then invent and perfect. And Frank ended up revolutionizing the quality of ice for hockey and skating with this very contraption.

Iceland, his ice rink in Paramount, California, became the testing grounds for the Zamboni vehicle. Slowly but surely this magically hypnotic vehicle that slowly circles the ice made the big time, and refreshed the ice for the first time in the NHL. The year was 1955. Why stop there, Zamboni? The Zamboni then found itself in the spotlight during International competition for the very first time in 1960 at the Squaw Valley Winter Olympics.

Many years later, we still find the Zamboni taking the cue and setting the pace for relaxation during intermission, most likely capturing the attention of a three year old child in the crowd, a child who is just beginning to understand what hockey is. That child will never forget the Zamboni, and nor shall we.

Living Hockey is almost finished (2010 Winter Olympic chapter is a work in progress). If you'd like to be in loop on pre-sale information and other news, please join the mailing list by emailing info@hockeyandhighheels.com with "add me" in the subject line. Thank you for your interest!
Posted by L.A. Ovens at 11:44 PM