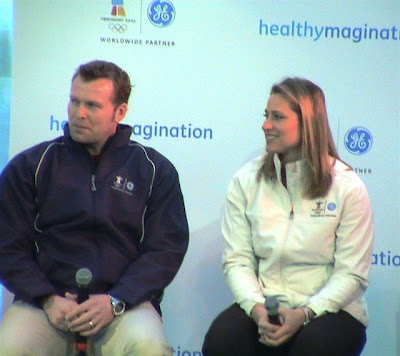 As I watch the Winter Olympics, I am reminded about the fitness level our athletes have achieved before they even get close to winning a medal. Not to mention the mental side of competition.


A gold medal goalie and a gold/ sliver medal defenseman know about the pressure they face as their Olympic tournaments move forward. Here are two hockey player quotes from GE's Healthymagination presser and Healthy Heroes skate on Friday morning. Then I get a little ranty near the end...

"When you go out every day to perform, you have to take care of yourself. A healthy lifestyle is not just exercise or eating right, it's an attitude as well." Martin Brodeur Team Canada

Everyone is pretty much saying today's men's ice hockey game between Team Canada and Team USA will be like a "TSN Turning Point" in the men's tournament, or a possible pairing for the gold medal game.
It also promises to be a physical affair, with Canadian fans hoping their team will pick up that part of their game for Team USA. One thing I am confident in is Brodeur and his "attitude". Let's hope that winning attitude will rub off on the defenders in front of him (Yeah, I'm talking about you, Pronger).

"I always have this incredible team of doctors, physical therapists and nutritionists to support me. A program like healthymagination gives all of us the tools and support to help achieve those goals." -Angela Ruggiero, defenseman, Team USA

Angela Ruggiero and her teammates are tied with Team Canada at nine points. As much as we've seem some exciting games between more evenly match teams in the women's tournament, everyone is patiently waitng for Canada and USA to meet.  Will that temporarily shut up the sports media pundits crying for "mercy rules" and the women's game to be dropped from the Olympics? Probably not.

When it comes to Olympic hockey, I consider female hockey players to be "the unsung healthy heroes".

Not only do female hockey players have to be in top physical condition, they apparently need an extra layer  of mental toughness to block out the predominately male sports media criticizing them during the Olympics and then ignoring them for four years. I swear... it's like clockwork.
Posted by L.A. Ovens at 1:53 AM