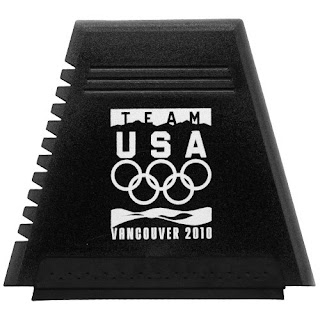 How's that for some Olympic swag?  "Team USA grinds out victory over Canada " so says tsn.ca. And the above souvenir ice scraper could almost say a similar thing as well. But Team USA didn't have to scrape by thanks to a crazy empty net goal scored by Ryan Kesler in the dying moments of the 3rd period: final score 5-3. USA hockey fans are thrilled with this win, and should be gaga over Ryan Miller's work in the crease. Talk about Miller time!

Team USA wins group A and secures their spot in the Quarter Final. On the Other hand,  Team Canada has an good opportunity to pull it together in the Qualification Playoffs on Tuesday and possibly settle into underdog mode for the Quarter Final round. 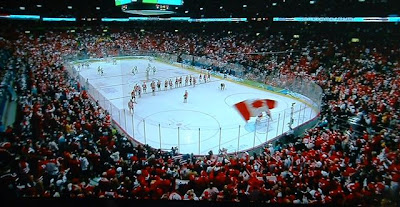 The red swarm of fans moving into Canada Hockey Place late this afternoon was a spectacular sight. Perhaps this loss will settle the masses down a little; bring us back to earth if only for Monday.  But only until the women's tournament heats up with Semi Final action. Team USA will be playing on the 30th anniversary of the  Miracle on Ice. And Team Canada will take on Team Finland. We know our girls will be prepared for this game, but I really like this quote from the Finn's goaltender Noora Raty...

"We can't lose that game 10-0. It's so bad for women's hockey. We have to play a good game and show everybody women's hockey belongs to the Olympics."

I like that attitude...we want a closer game, an exciting game, but with Canada as the team to head to the goal medal game ;o)