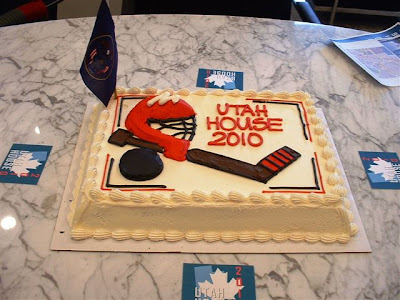 Okay, I went to Utah House Party tonight and met some hard core Olympic peeps. I was too busy signing books and making new friends that my best photo was this one of the cake!

We now know Oprah bought up quite a few red mittens to give away on her show. Well tonight I met some dude that bought 80 pairs of mittens! Next to Oprah, I know of no other to buy more than eighty of the cheerful hand cozies to give away as gifts to friends. The dude's name was Dave, and his friends are going to love the gift mitts!

Tonight, it became quite apparent to me as to why it's called "The Olympic Movement". An Olympic event happens in a city, citizens become involved, and then they are swept up in the fun and move on to the next one, either through employment or as a spectator. Either way their are super enthusiasts, and the host of the party, Everen T. Brown has made Vancouver 2010 his eleventh Olympics! This was a perfect opportunity for people from Utah to get together and share stories and laughs.

Thanks Everen for a terrific party. It's was awesome for me to meet some of Utah's finest sports enthusiasts and new Olympic friends because I have a feeling I am going to be swept away by this five ringed wave!
Posted by L.A. Ovens at 11:58 PM