Hahaha! Gotta watch that one a few times to get all of the great hockey references and humor.

As I type there are four pages of Molson Hockey House tickets for sale on Vancouver's Craigslist.


Team USA and the Ryans

This is a neat little hockey sidebar: Team USA has seven players with the name Ryan. (actually one of them is a last name) Coach Ron Wilson has some sorting out to do. How to you keep them all straight in your head? My suggestion....give them color names, just like in Tarantino's Reservoir Dogs. Now who will wind up with Mr. Pink??? Ryan Malone, Ryan Suter, Ryan Miller, Ryan Kesler, Ryan Callahan, Ryan Whitney or Bobby Ryan? 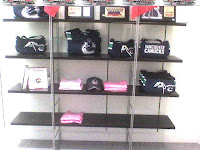 I am always on the look out for female hockey fan friendly establishments, and Rocky Mountain Sports Marketing is one to watch. Inside the store is a growing section of fun hockey merchandise for women. And it includes copies of Hockey and High Heels, too!

This is a cell phone pic, but I will be heading there today to see if there is any new stock in. They also stock jerseys (International and NHL) flags, souvenirs including pucks, autographed memorabilia and some cool hockey art.
Check them out in International Village next to Starbucks on the corner of Keefer and Abbott. Only one block from Canada Hockey Place! 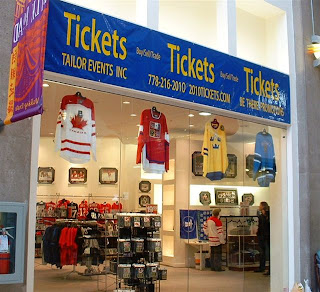