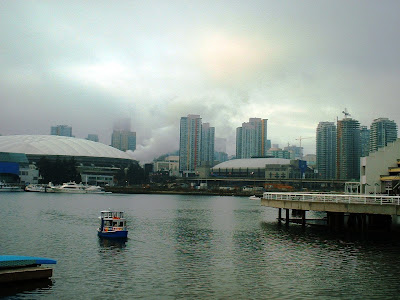 by Lisa Ovens
I've been going through some of the notes I wrote after the Closing Ceremony in Torino 2006.

A shockwave had rolled over Vancouver and the rest of Canada after witnessing a brief “sample of Canada” presented in Torino. Plenty of critics showed up leaving everyone wondering if Vancouver 2010’s ceremony would cut it as far as big spectacles go.

And then the most recent Olympics in Beijing 2008 didn’t help: their ceremony was over the top! Going back to my notes, I had made a list of things I would do if I were in charge of the ceremony in BC Place. I have been to plenty of events there; Pink Floyd, U2, Rolling Stones, U2 again, and more, including the very first concert held in the Dome: David Bowie, Peter Gabriel and the Tubes (I was a younger kid then.) If Robert LePage was available (he’s done some amazing Peter Gabriel tours, and other grand installations), I would hire him to produce the show (but as it turned out, we have the Australian, David Atkins in charge. Though Robert LePage is part of the cultural Olympiad: The Blue Dragon).)

Over the last few days I have done my best to avoid any of the “reports on the ceremony” from people who attended the dress rehearsals. If I feel someone is about to say too much I stop them in their tracks. I haven’t seen any photos or videos leaked. All I have is my list of what I would do, so here it is.

-Interior should be completely white, with lots of ice inside...minimalist looking, like Superman’s Fortress of Solitude.

-Ban anything resembling a Styrofoam tree, rock, or mountain top. Unless you are staring the natural beauty of Canada straight in the face, you’d best be experiencing the landscape shot on high definition cameras and projected onto the best damn screens money can buy.

-Go easy on anything to do with ice fishing.

-Incorporate boats into the show. (Ever since I went to a boat show in BC Place, I ‘ve always felt boats, especially big boats look really cool inside, with no water around.) Sail boats have a dramatic look at times. And I love they way they look dotting the ocean in Burrard Inlet on windy days.

-There should be some light comedy performed. Okay, this might sound crazy, but if there is one thing Canada is known for is producing funny people. I figure a little comedy would be nice, and a little different than other opening ceremonies. Imagine an MC working the crowd of famous people in attendance, sort of like how some Academy Awards show hosts do ;o)

-The torch bearer that lights the cauldron should be a man and a woman if possible. If hockey is defining us as a culture right now, then make it Wayne Gretzky and Cassie Campbell. (I thought this up until Cassie was in the Torch Relay on Prince Edward Island in November)

Well those were some of my ideas, I'll know soon if any of them come true. There are plenty of people out there still not comfortable with Australians pulling the strings for the 2010 ceremonies. All I can say is crikey to that!

Today is the big day. I will not be attending the opening ceremonies in person. I will be a few blocks away from BC Place at my cousin Jen’s watching on television. I can hardly wait. This is a big one on the Olympic schedule, and for some I imagine it will be a huge relief when it is over. Best of luck to all the ceremony organizers, and performers; I am sure you will all do us proud!