While Watching Hockey Day in Canada... 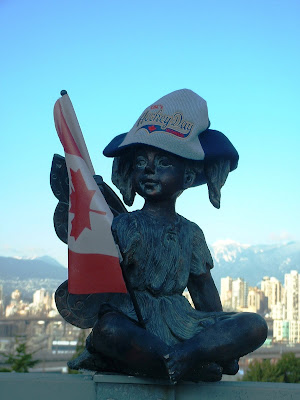 I'm taking a little break from the Olympics today. Instead I'm relaxing and watching the Hockey Day in Canada coverage on CBC Sports. I am also reviewing tweets on Twitter and I noticed  a journalist I follow re-tweeted a post from Vancouver Magazine's twitter page commenting on the up coming HDIC tilt between the Vancouver Canucks and the Toronto Maple Leafs. Van mag has a gimmick called the Vanagram, and this is what today's Vanagram is...

Now,this is going to turn into a "Lisa's Tiny Rant":  there is something wrong with this and I am going to fix it. Can you guess what's wrong with this Vanagram? It's sexist, that's what's wrong with it. If we are ever going to evolve as human's, then one particular sector, the writers of the world, have to put more effort in to their craft at times, especially when the subject is sports. And I am not talking about grammar. I am talking about the message.

Often times the worst examples of sexism come when someone is trying to be funny. If a little more thought and care went into the writing process, a writer could express humour without hurting anyone. What's happening right now with this Vanagram is people are re-tweeting it so even more people are reading this sexist comment. Plus, I am writing about it so my followers are reading it. But I am hoping people out there get what I am saying and will stop and think before taking the easy way out and resorting to the "weak female" punchline.

At this moment, as I write, a group of young, hockey playing girls at Hockey Day in Estevan are being interviewed, and we need to think of girls like these ones everytime we write about sports. We can't let them down, we can't put them down. Here is my re-write...

Who can really be hurt by that version? Niles Crane is a fictitious character not known for his brute strength. It's actually more humorous than the original Vanagram in my opinion.

If I see more examples of items in need of re-writing I will continue to add to this entry throughout the day. I need to come up with a gimmick name as well...
Posted by L.A. Ovens at 2:16 PM

I get it and glad you are putting it out there.