Back in October I began a list of things to accomplish before the 2010 Winter Olympics end. Sure the list has things like magically scoring free tickets to events like the Opening/Closing Ceremonies, the Women’s and Men’s Gold Medal Hockey Games. Some of it was more like a wish list, while other items involved some work. 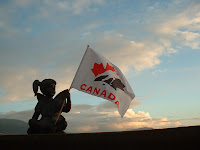 
4) Get a gig reporting from the games, in addition to my work here at 2010 and High Heels


6) Have an Olympic Fling with a sexy and single French Canadian man “Behind the Rings”!

7) Go To Whistler without a single ticket to an event


9) Have my very own Hockey and High Heels House

Here are the updates...

I did try to do this, but I did not succeed. I contacted Molson Blogger/Twitter Adam Moffat and asked about displaying my work. Within seven minutes he responded, and within 30 minutes, the assistant producer from Vision Co, the Toronto based PR/ branding firm contacted me and requested to see some of my hockey art. Now, even though my art was ultimately turned down (mostly bureaucratic reasons), at least this Big Toronto Company gave a little guy like me a chance, and I am very appreciative of Vision Co for doing that.
Remember what Wayne Gretzky said...“You miss 100% of the shots you don’t take.” I’m sure Molson Hockey House is going to look fabulous.
Be in Molson Hockey House...for free

Okay, I humored myself thinking if my Hockey Art got in, well that would be an automatic buy for me to get in...

So far, I haven’t seen these expensive tickets drop down in price to $0, but here’s hoping...

Get a Gig Reporting from the Games

I tried here, too. I entered a video into a Petro Canada Family Correspondents contest, but I didn’t win. It would have been pretty cool, but I am excited for the winners and will follow them as they follow our Canadian Winter Olympic athletes. At least I still have this blog, and my beautiful followers around the world...hi beautiful followers...thanks for your support ;o)

Win a Trip to Vancouver

Now before you all say “But Lisa, you are already in Vancouver”, let explain my stance. You know that old saying “be a tourist in your own town?” Well, I’m just trying to exercise that popular expression! Weirder things have happened. Downed by the Petro Canada Contest again...winning the Petro Canada contest would have made this bucket item come true as that was part of the prize...

Hey, can’t be the athletes in the Village getting all the action, many of us civilians are, and to put a spin on the Bode Miller quote, keen on cuddling at the "Olympic level". Now this item is cascading (just like buying Olympic tickets online) meaning Feb 12th...he’s a sexy, single French Canadian man. Feb 19th, he’s a boom microphone operator from the Mid West and his nickname is Frenchie. Feb. 28th he’s a man and hopefully has a part time job ;o)

Go To Whistler without a single event ticket

This would be fun...who doesn't love Whistler when there is a big event going on? The whole village is one big hospitality house! I was in Whistler watching the 2002 Salt Lake City Men's Gold Medal Hockey game when Team Canada won Gold. Of course this time could prove to be a logistical nightmare for me.
Here's hoping! 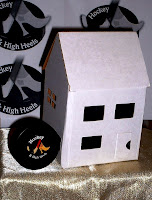 I had this idea a few years back, have my own Hospitality House, in a white tent, and throw a super fun party! But, sadly my mom got sick and I needed to be with her as much as possible over a year’s time as she fought cancer. Recently she passed away. There was no time to plan the house. But I have a house now, however it's a little small...and its secret nickname is Stella’s House (my wonderful mom’s name). Perhaps with a little work, I can grow it bigger...
Posted by L.A. Ovens at 3:46 PM

Well, aren't you peppy. Hope you have a lot of fun, and go easy with those french guys.