Vancouver Canada. Great things come in small packages. Measuring in under a foot high, Hockey and High Heels House is the smallest and most charming Hospitality House going at the 2010 Winter Games in Vancouver. Named after the critically acclaimed hockey book and website, Hockey and High Heels House could possibly be the only completely mobile Olympic Hospitality House.

House Director, Lisa Ovens is pleased to announce the first sponsor, an atlas software company based in Salt Lake City, Utah. 360° World Atlas developers had been following Lisa's 2010 and High Heels blog since early October. Being Olympic Hockey enthusiasts, the software company owners jumped on board for this unusual sponsorship . " The irony that a software company that presents the vastness of the Earth is sponsoring something so small...wow! Now all I need is some tiny 360° World Atlas logos and I can start decorating!” says Ovens.

As pleased as Ovens is with her first sponsor, there is room for more. “Well, it would be nice to have a small tent as an alternative to this tiny house....that way I could actually invite people inside. How many do you think I could have in an eight foot by eight foot tent? I may have to get a velvet rope and a red carpet for the line up.” Ovens says with a wink.

At this point in time the house is so small Ovens can tote Hockey & High Heels House in her purse where ever she go during the Games. “For example, I’m booked in at the Lodge Restaurant at Holland’s Heineken House, so Olympic party goers there might get a peek at the house and maybe a free copy of my book ” Ovens added.

Some lucky Olympic enthusiasts may be in the right place at the right time to receive a complimentary copy of Hockey and High Heels. Ovens has a limited quantity of her hockey book to give away during the Games. “The book is exclusive for the events I do with hockey teams in the States, but I always planned on giving some away personally during the Winter Games.”

Ovens had planned to host a party during the Olympics, but everything had to be put on hold after her mother, Stella was diagnosed with cancer. Ovens took over a year off to help care for her mother as she fought for her life, but recently passed away. “My mom was my hockey buddy. This is my first Olympics without her, and that’s why I have to carry on with Hockey & High Heels House" says Ovens..."she was my number one supporter and she would have wanted me to keep going with my plans for the house, even if it turns out to be only eight inches high.”

Ovens has nicknamed the house Stella's House, after her late mother. Interested sponsors for Hockey and High Heels House can contact Lisa via email  info@hockeyandhighheels.com.

About Hockey and High Heels

Author Lisa Ovens wrote the critically acclaimed Hockey & High Heels- A Different Kind of Hockey Book as a means to recognize and celebrate the female commitment to the game. She has been enlisted by US based hockey teams in the United States to help grow the game by hosting special events for women. Ovens has worked with the Pittsburgh Penguins, LA Kings, and Phoenix Coyotes among others. Her second hockey book is due out this fall. For book reviews and media interest please visit the official website.

The 360° World Atlas DVD software program is the world’s first interactive Virtual Reality atlas. One disc features over 1200 360° Virtual Tours from around the world. The easy-to-use software allows a viewer to explore the world by continent, and then zoom in by country or region. The specially designed maps are linked to Virtual Tours. One click will take you to a revolving Virtual Reality image - a 360° view of that destination. Clearly written historic and geographic information complements each tour.


About Hockey and High Heels House

House designed by Royal Canadian Academy of the Arts member artist, Robert Chaplin. It comes with its very own mortgage. Chaplin is a world reknowned Sculptor and Illustrator. 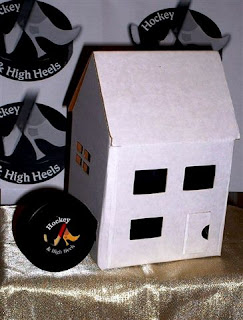