2010 and High Heels Swag Off Round Three has historical significance to the hockey world at least... Remember the Quarter Final game between Sweden and Belarus during the 2002 Winter Olympic Men's Hockey Tournament in Salt Lake City? With less than three minutes left in a game tied at 3-3, Vladimir Kopat scored a crazy goal on Swede net minder Tommy Salo. In the end Belarus won 4-3, knocking Sweden out of the tournament. This was an upset indeed. It was recently selected the number one upset on the top ten hockey upsets list over the last decade by Puck Daddy at Yahoo Sports.

Quotes from the game...
"For sure, it is a miracle for us. But sometimes a gun without bullets can shoot, and that was us. We've made our place in history." Belarus goal tender Andrei Mezin
"I don't understand how we could lose against this team," Swedish captain Mats Sundin 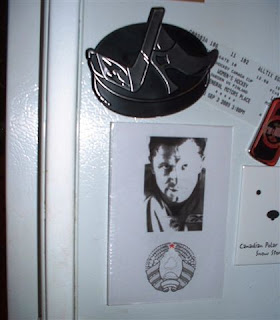 Belarus Finding swag boasting the Belarus National Hockey team logo in Vancouver proved to be a challenge for me. So when the going gets tough, the tough get, um, creative!

I made my own Team Belarus hockey swag. 2010 and High Heels proudly presents the limited edition Ruslan Salei Fridge Magnet*.

Also adorn with the the Belarus Coat of Arms, this attractive Team Belarus Hockey swag item will jazz up fridges of all types and colors. (Ruslan Salei is a defenseman for the Colorado Avalanche (NHL), and Olympic Hockey veteran: Team Belarus 1998, 2002, 2006, 2010)
* only one magnet available on the planet. 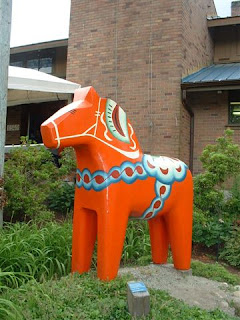 Sweden Dalecarlian Horse (or Dala horse) No doubt there are plenty of Dala Horses standing at attention in display cases at hockey rinks around the world. The horse is a symbol of Sweden and the swedish province of Dalarna, but originally it was a popular wooden toy for kids.


This bad boy can be found in Burnaby, BC at the entrance to the Scandinavian Community Centre, a place that will be hopping during the 2010 Winter games. The King and Queen of Sweden, Carl XVI Gustaf and Sil­via Bernadotte, will visit the centre on February 25th, 2010 for a Swedish Royal Reception.


Vote Now... Vote for your favourite swag. The poll is top right of this page.

Will this be another historically significant upset for Sweden?
Posted by L.A. Ovens at 12:13 AM