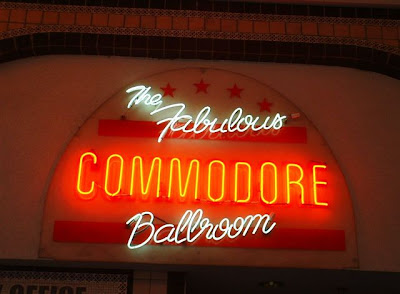 Budweiser Beer created a nice little 2010 Winter Olympics gig for itself: acting as an Official party host at the legendary Commodore Ballroom on Granville Street. "Club Bud’s" list of corporate party goers include The National Hockey league, Under Armour, Burton Snowboards, Lululemon, and of course, themselves. Five party nights promising sports stars, celebrities and keg after keg of ice cold Bud. And Club Bud wants you to crash the party!

Club Bud is searching for two official party crashers to go behind the velvet rope at a minimum of two parties and report on the action via their phones. This contest is only open to BC residents (sorry Ontario...you have to sit this one out!)

To apply for the party crasher gig, become a fan on Club Bud’s facebook page, click on “apply”, answer a few questions and you are entered in the contest. Good luck to the potential crashers.

Ah the fabulous Commodore Ballroom. I could fill a book with memories from that place. And every chapter would contain my exploits on the spring loaded dance floor. I went to punk shows, rock shows, jazz shows and some crazy Halloween parties, too. But my all time favorite show to see at the Commodore was Bootsy Collins. CAN YOU SAY FUNK??


I actually danced with Bootsy during that time in his show when he heads down into the crowd. I spun around and there he was. He grabbed me and my friend by our arms and we got the funk, baby!!

And that springloaded dance floor...you could stand perfectly still and the packed floor would do the dancing for you (but only a fool would do that). I remember the feeling of the first dance of the night: walking out, instantly feeling the floor doing it's own thing, then catching the groove and staying there forever because there was no good reason to stop (okay...eventually the call of a beer would grow louder and louder).

It's been a few years since I've walked up the stairs into the Commodore, and if I am not mistaken, that amazing dance floor was removed during renovations ( a major fire hazaard). If I am right, then when that floor was removed, a little part of Vancouver died with it. Maybe that's how the "No Fun City" nickname got a foothold on this town.

And  Finally, onto the beavers because the one thing this country needs more of is beaver stuff! Howe Sound Brewing Co of Squamish, BC has launched a new brew named Three Beavers. Like Club Bud, the beaver beer is not an official Olympic Sponsor, they just like to party like one...woot! The three beavers featured on the label even have adorable little medals hanging around their necks. Check it out here Howe Sound Brewing website. It's a red ale, complete with a dual action closure system: a pop stopper and a cap! Enjoy...
Posted by L.A. Ovens at 12:01 AM