I feel like Saxony House is a kindred spirit of mine: Saxony is a free state, just like Hockey and High Heels House is. We stand alone proudly, yet are a part of the 2010 Winter Olympic experience. That probably is the only thing Saxony House and Hockey and High Heels House have in common. They have rented the stately Tudor water front home of the Vancouver Rowing Club, where as my house, well, its only eight inches high, made of cardboard and fits in my purse. 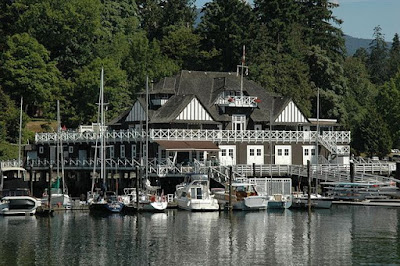 It appears the Saxons  might have a thing for rowing club venues: The water front venue they occupied during the 2006 Winter Games in Turin looks like it could be a rowing club (link to photo gallery here) . Go Saxons Go!

I have been to a few events at the Rowing Club in Stanley Park, and I definitely plan to visit Saxony House during the Winter Olympics. I am also a Saxon facebook fan (there are 63 of us now) and I am a fan of Wernesgrüner, a nice hoppy Pilsner and Saxony House's beer sponsor.

Saxony House at Vancouver Rowing Club, Stanley Park. Do it up like the Saxons: Saxon beer, sausages, sauerkraut, music, and entertainment!!! Winter Olympic hours:  Open 12pm to 2 am