"I'll take Olympic things to Wear on your Neck and Chest for 200, Alex" 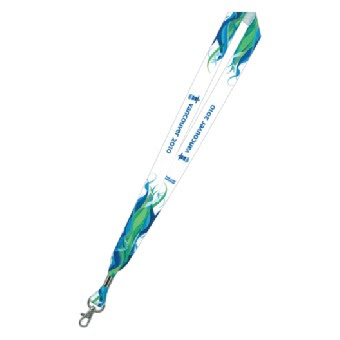 You know what I'm thinking? As of February 4th or 5th, Vancouver will be the Lanyard Capital of the World. The reign won't last forever, but one would be hard pressed to come up with another location that will have more lanyards swinging, bouncing, getting tangled and then tucked inside pockets and V- neck sweaters than Vancouver will have because of the 2010 Winter Olympics.

I often wondered who invented the lanyard and why such a name was chosen to describe a necklace that conveniently holds relatively small and important documentation. So I searched and found this website:
http://lanyardsguide.com/.  According to lanyardsguide.com, "lanyard is a nautical term used for holding things down on ships. In use since the 1700's, lanyards have a history of miltary use including the Napoleonic Wars."

Earlier today I saw plenty lanyards dangling around the food court at Waterfront Centre : the closest food court to the Main Broadcast Media Centre. My mission at the centre...visit the Tourism Vancouver Office to pick up my "ASK ME! Happy to Help" button.

I learned about the buttons from Andrea, a popular 2010 blogger ( http://2010vanfan.ca/) and Olympic Collector Pin enthusiast. (Andrea's blog rocks...be sure to check it out)

Local Vancouverites can wear the buttons when out and about during the Olympics as a beacon for visitors who may need "directions, advice, or just snapping a photo." I was born to wear this button, becasue I am like a tourist magnet. The buttons come in 24 different languages, so if you speak other languages, definitely pick up a button at the following places...

For more information on the Ask me buttons please visit the 2010 Host City Website.
Posted by L.A. Ovens at 2:21 AM

The beautiful thing about the 2010 Winter Olympic lanyards is that they are proudly Made in Canada by one of the licensed distributors. They have been consistently selling out on eBay mom and pop shops, the Vancouver2010 on-line shop and a popular Canadian sports merchandise store FlagKingSports.com .

The only problem is VANOC has seen fit to not include the plastic ticket holder for the lanyards they are selling. While smarter on-line stores such as FlagKingSports.com are including them with every 2010 lanyard purchase.

Plus once the lanyards are sold out you can always switch to a Hockey Canada or your favourite NHL or NFL team.

Just keep those tickets safe people and enjoy the 2010 Games while they last.