2010 and High Heels Swag Off: Round Two Finland vs. Russia

Welcome to Round Two of the 2010 and High Heels Olympic Swag Off!

Before we begin round two, congratulations are in order to the winner of Round One, Team USA Olympic Rings Bracelet. The Bangle swag beat out Team Canada's drinking glasses (75% of votes) Click here for Round One. 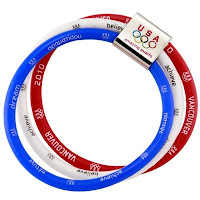 Now onto Round Two... 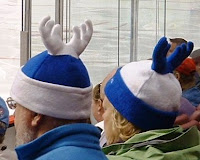 The Finnish Reindeer Hat could very well be the must have 2010 Winter Olympic accessory, but you can’t get them in Vancouver (even though the photo was taken at the Hockey Canada Cup Tournament in August) We found out from these two Fin Fans that the Hats are only available at a market in Helsinki, Finland. What we wouldn't do for these hats!! But there is hope: Hockey and High Heels book designer/ field correspondent, Michelle will be searching for these hats on a Finland trip in January. 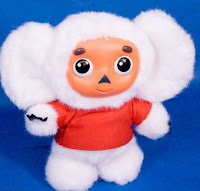 CHEBURASHKA, Team Russia Mascot. According to Cheburashka.com, “Troll dolls don’t have a thing on Cheburashka!” Cheburashka dolls were all the rage in Turin, host city of the 2006 Winter Olympics. A red version was Russia’s Mascot in Beijing 2008.

A lead character in a Russian children’s story, Cheburashka was originally from Africa. The wide eyed furry creature managed to find a crate of oranges to eat, fell asleep and then wound up being shipped to Russia along with the oranges. Cheburashka has been melting hearts ever since.

Vote for your favorite Round Two Swag Now...place your votes at the poll located top, right of this page.
Posted by L.A. Ovens at 8:50 PM