(This is what I look like when it's really cold in Vancouver, and it's been really cold lately. I'm talking -1 to -6 degrees Celsius kind of cold) 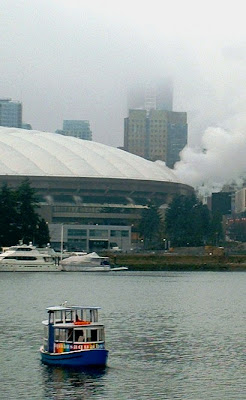 BC Place Stadium and False Creek

The following is a list of musical acts that will be rocking BC Place as headliners during the nightly Victory ceremonies. I should say, mostly male musical acts. They are calling this the Vancouver 2010 Concert Series presented by Bell, but I'm calling it the 2010 Mostly Men Concert Series.

Yes, it's time for another tiny rant (I haven't had one since October) It's one thing to keep the ladies off the ski jump, but now the concert stage? The lack of female talent is a concern to me not only here with the Victory Ceremonies, but also with the acts scheduled at Molson Hockey House, too. As of now, these Vancouver 2010 Olympics are really shaping up to be just one BIG SAUSAGE FESTIVAL on Stage!

I can only hope more rockin' chicks are enlisted to entertain soon. Alanis Morrisette, Bif Naked, Feist...where are you??

Feb 15 To be confirmed  presented by Quebec

Feb 19 Theory of a Deadman presented by Northwest Territories

*Please note: there will be no medal ceremony on February 20 and no Victory Ceremony at BC Place on February 22nd. Schedule subject to change.
Posted by L.A. Ovens at 5:58 PM