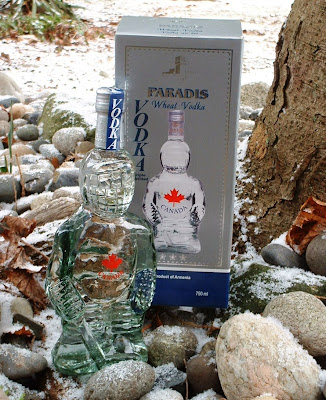 I think I will finally crack open this bottle in celebration


Back in October I was out with my buddy Andrew and friends. We watched a Vancouver Canucks away game (a good one, too – beat Chicago Blackhawks, in Chicago...and oooh, that Willie Mitchell hit on Jonathan Toews!) and then decided to walk to a specialty liquor store so Andrew could get a certain bottle of beer. Along the way we stopped at a six foot tall plastic Absolut Vodka bottle just standing, unattended on the edge of a parking lot. I had noticed this bottle in the same spot, earlier that day.

The “Absolut Biggie” was acting as some sort of “speaker’s corner recording device”, but it was only fitted with a camera so naturally some jumping around ensued. I was too short for the lens’s view, but that was remedied quickly. Then off we went into the night.

Well, last night around midnight I had another “Little Water” run-in (Vodka means little water in Russian). I was walking by the Vancouver Art Gallery (Howe Street side) checking out the freshly lit Christmas Tree, heading to see the lights of Robson Square. I noticed an American made automobile parked on the art gallery’s lawn located on the south side of the building. I thought this was unusual.

On approach to the vehicle I noticed it had a projector sitting on the roof. I looked at the building across the street (the white exterior of Sears) and sure enough a large bottle of what I think was Russian Standard Vodka was there on the wall, glowing in the night (It was only a two scene commercial). I looked at the car and a guy was seated in the driver’s seat, but slumped down trying to be invisible. With so few people around, his cover wasn’t exactly threatened.

It’s a different kind of gang war: Vodka brands fighting for a shot to splash inside Vancouver’s tumblers. The 2010 Winter Olympics are 61 days away, and local Vancouverites can expect more marketing warfare in the weeks to come.

Personally, these vodkas have nothing on the limited edition Vodka pictured above: Paradis Wheat Vodka from Armenia. I bought this bottle three years ago at the Vancouver International Airport. It was obviously something I couldn’t live without.