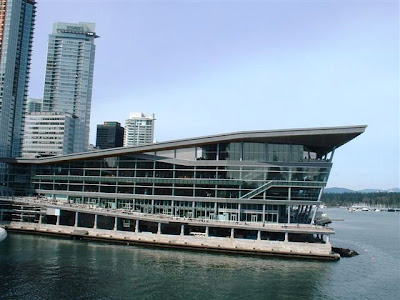 Well, after all the talk and action surrounding my video entry into the Petro Canada's Family Correspondent Contest, I felt this would be a good time to talk about Olympic Media Coverage.

There will be two accredited media centres in Vancouver, and one located in Whistler during the Winter Games. This means almost 10,000 media people will be employed around the clock bringing all the Olympic action to their home countries around the world.

A new fixture on Vancouver's downtown waterfront, the Vancouver Convention Centre (pictured above) will be a breezy, natural space for the 7000 accredited members of the broadcast media producing live television and radio coverage of the 2010 Winter Games.

In October I worked on a film in the centre so I had the opportunity to be there for a 15 hour day. Acting as a German business woman in the upcoming remake of the "A -Team" I spent most of my time in the massive lobby (the production company turned it into the Frankfurt train station for the movie).

I rode the escalators up and down for many takes as actress Jessica Biel ran around in a panic. It's quite possible Jessica did not notice the centre's living roof and the natural use of wood the designer's chose for this inviting building. She may not have been aware of the stunning water and mountain views seen through massive walls of windows. 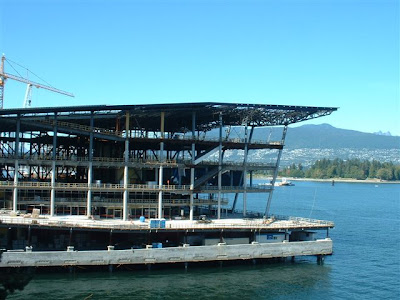 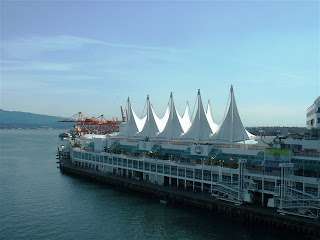 Canada Place is a busy spot on any old day:  it's home to the Pan Pacific Hotel, Vancouver Cruise Ship Terminal, the Port of Vancouver offices, the World Trade Centre and the Vancouver Trade and Convention Centre.

But during January and February, it's really going to be bustling and filled with the noises of thousands of fingers tapping on laptop keyboards and the sounds of lenses coming out of cordura camera cases. Approximately 2800 accredited print media and photo journalists will work 24/7 churning out the Olympic sport stories to be uploaded and emailed out to the world's newspapers.

Located in the Whistler Conference Centre, the Whistler Media Centre will be a warm, cozy retreat for media folk assigned to the skiing and sliding sport venues. Wish I had a photo of the conference centre, but in all my trips to Whistler I have neglected that building. So please enjoy this photo of Whistler Village I shot during the Whistler World Cup February 2008. 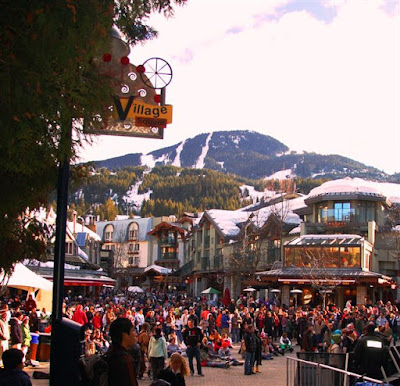