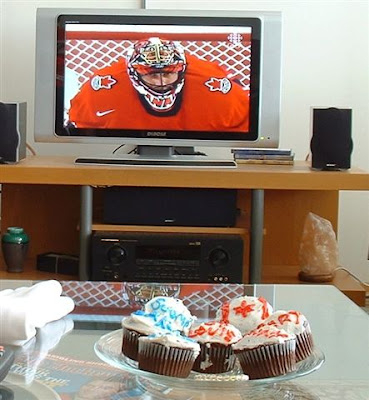 At least this photo is a flashback for me. February 19th, 2006 my friend Michelle came over to watch Team Finland vs. Team Canada. Along with her 2006 Olympic Hockey Tournament enthusiasm, she brought two teams of Cupcakes: Team Finland's were decorated with our fave Finnish Player names, and Team Canada decorated with our fave Canadian players names. Plus she did up some cupcakes with the team flags. We had two plates loaded with the Patriotic treats.

At one point early in the game, there was a long close up of Team Canada goal tender, Roberto Luongo in his crease. It was like he was hypnotized by the cupcakes in front of me...just gazing at them.

Finland won the game 2-0 (Antero Nittymaki was in net for the Finns; obviously he didn't get distracted...)