One Way to Celebrate the 2010 Olympic Torch Relay 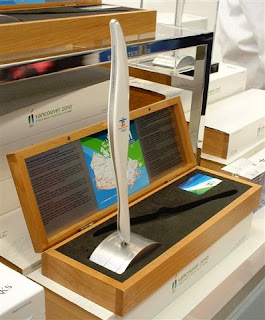 It's a scale model of the torch with a brushed aluminum base, stored  in a gorgeous, genuine Canadian Alder wood box. The replica torch is a limited edition piece (50,000) and the set includes a certificate of authenticity.
Cost:  CDN $295

Birks is the official supplier of jewelry for the 2010 Winter Olympic games. The name Birks goes back to the late 1800's in Canada. Generations of Canadians have received precious keepsakes in Birks blue boxes for birthdays, Christmases, graduations, weddings and those gifts "just because..." 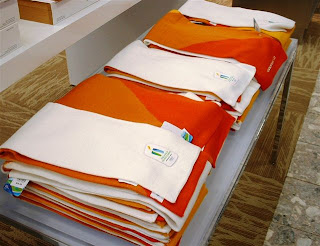 Okay, let's say you you didn't make the torch bearer team, and the replica doesn't fit your budget. How about a nice 2010 Winter Olympic Torch scarf? These scarves are an acrylic/ polyester blend in beautiful rich, fall colors.

The Olympic Torch replica and scarves are both available at the 2010 Olympic Superstore in The Hudson's Bay, downtown Vancouver.