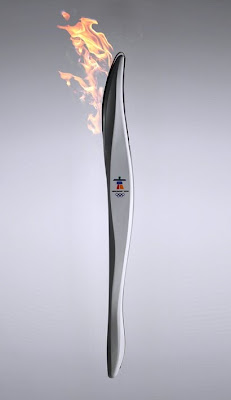 Made by Bombardier , the 2010 Winter Olympic Torch is supposed to remind us of the track a skiier leaves in the snow. I can see that. That's the official description. But to many, the first thing they saw was a big marajuana joint (the unofficial description). 12,000 of these torches will be used during the 2010 Olympic Torch Relay heading across Canada beginning Friday Oct. 30th, 2009.

The Olympic Flame symbolizes the principles of peace, brotherhood and friendship; characteristics I believe Canada has an abundance of.

The Olympic Torch is coming to a town or point of interest near you! In fact, about 90 per cent of Canada’s population will be within a one-hour drive of torch relay. And there will be parties. Over 200 community parties will take place over the course of the 106 days, with the biggest party on February 12, 2010, the Opening Ceremonies of the 2010 Winter Olympic Games at BC Place in Vancouver. 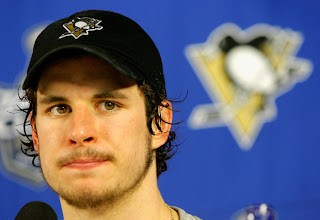 12,000 people will be responsible for running the torch and lighting up the torch in the hand of the next runner. I know what "next runner" I'd like to be: The runner after NHL superstar, Sidney Crosby. His leg of the relay is on Nov. 18th through Halifax, Nova Scotia, and he's feeling very honored to be involved in this long standing bit of Olympic pomp and circumstance.

Sidney Crosby is a Stanley Cup champion, a dedicated althete and is respected by many the world over, but especially by the citizens of his home province, Nova Scotia. Wouldn't that be cool to be standing on a road, and it's Sid the Kid running towards you all smiling and happy to see you? I'd like that, and I know I'm not the only one who would.

Best wishes to all the torch bearers as they keep the flame alive and burning bright over the winter!