Yes, a one day pass at M.C. Hockey House will set you back $500.00. However, for that $500 dollar ticket you can arrive at 11:00 am, eat, drink, cheer, dance, drink and sing your face off and then shut'er down at 2:00 am when the joint closes. Think of it like a serious party day at an all inclusive resort in Mexico but instead of the beach, swim up bar, sunshine, and nearly naked bodies, you get better quality food, lots of over sized jerseys, a bald guy named Tyler, and two chubby faced guys named Brent Butt and Sean Cullen.

Have I got you excited about this yet? So excited that you want to sign up for the full meal deal, a 17 day pass at da House? The pass costs $8500.00 and with that you'll get your own private booth along with the food, beer, and entertaining bald and chubby guys. This seriously is Hockey in Canada, folks.

Okay, I am teasing the entertainment guys a bit. Doesn't mean I don't want to check out the Hockey House, though! I love the idea of such a huge dedicated hockey space. And if ticket sales are slow we can expect the price to drop, which is good.

This will be the largest temporary building/ pavillion ever built in Canada. 15,000 square feet of this space will be sacred hockey ground: Hockey Canada's Olympic Headquarters. That's right, a portion of the house is reserved for our Team Canada (women's and men's) and their families. It will be their place to kick back and chill out. The International Ice Hockey Federation (IIHF) will have a cozy 9000 square feet to call their own as well.

If I remember correctly, the Hockey House decor will include hockey art. Now, if I can't manage to get inside the Hockey House for some serious indoor hockey fun, I would like to at least see my hockey art hanging on a wall. These are my second and third Olympic Challenges:

Fan's of Lisa's hockey art are invited to purchase a Mesh Galleria blank greeting card set available exclusively at The Shop at hockeyandhighheels.com 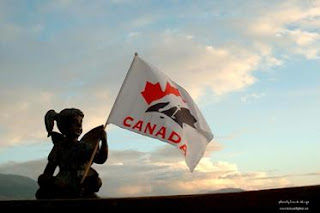