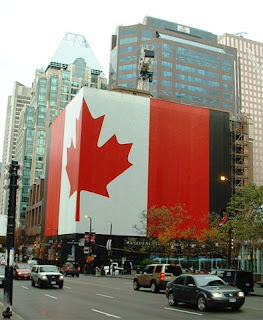 This is the Hotel Georgia, a historical building on the
corner of West Georgia Street and Howe Street in downtown Vancouver. It's being restored and a 48 storey glass residential tower will be squeezed in behind. Yes, everything downtown has to be tucked right in; space is at a premium here. And for years developers have been having a hayday "tearing them down" and squeezing them in.

My cousin Jen and I were reminiscing about bars we used to refresh at in Vancouver that have since been destroyed (not by us!) and the basement bar in the Georgia came up: the Chameleon. It was a hot, tiny club. And it was very red.

Olympic visitors who like to party should be prepared: most downtown Vancouver clubs are tiny in comparison to night clubs in other North Amercian cities.

My "Paint the Town Red" Shirt is here!!! 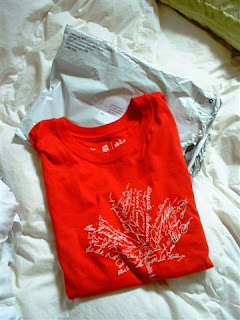 Thanks to Olympic cereal sponsor, General Mills, I received my free gift with cereal purchase on Friday. I had no choice but to order a kids size large because they had run out of adult sizes.
I was concerned if this adorable red shirt would fit...and it does! It will look even better when I drop a few more pre-Olympic pounds in preparation to paint Vancouver Red!

For the whole story and a review of the cereal, please click here.

Many British Columbians see RED when they think of Premier
Gordon Campbell. But the audience of the Today Show probably just saw the RED mittens Gordo handed out to the hosts as he promoted the Winter Games in New York yesterday.

By the time you read this, Campbell will be on his way to Olympia, Greece for the lighting of the Olympic Flame. Don't worry, he brought the torches with him. Yes, the torches that look like joints...geez...no matter what we do here, there's always a weed reference :o)

The Red Mittens: Only $10 and for sale at the Hudson's Bay, Home Outfitters and Zellers with proceeds going to Canadian Olympic Athletes. Here's a link where you can order online Red Mittens. 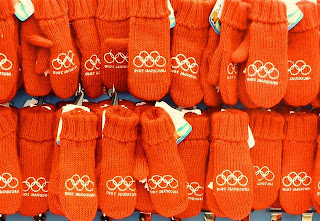