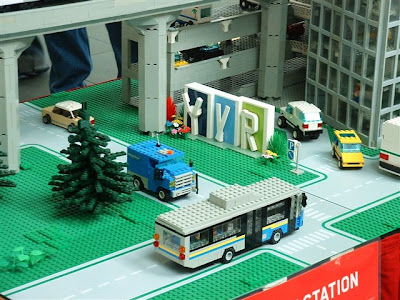 If I had my way, every airport in the world would have a customs and immigration area like Canada customs in YVR (Vancouver International Airport). It’s a great room, complete with water features running the length of two escalators, calming a traveler’s nerves after a long flight. The use of wood, soft blues and natural light makes it seem like a grand living room posing as a government run point of entry. But that’s Canada for you, eh?

YVR has been busy, preparing for the increase of travelers before, during and after the 2010 Winter Olympics. Yes, YVR can be a calm place to be, but maybe not the day after the Closing Ceremonies. Airport staff will be handling some 39, 000 people and their 77,000 travel cases. They will be using a temporary check in terminal just for athletes, their families, and other Olympic officials to help lighten the load.

Last December, Vancouver experienced an unusual amount of snow (a dozen snowfalls) causing all kinds of problems. YVR is now ready for a repeat dumping after adding 10 snow plows and spending $30 million dollars on de-icing upgrades. Bring it on, they say. 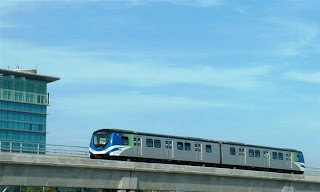 Canada Line arrives at YVR.
One mega project serving YVR is the new Canada Line train running to downtown every seven minutes. Vancouver may be the second city in Canada to host a Winter Olympics (Calgary was first), but it’s the first city in Canada to have rapid rail service to the airport. Take that, Toronto! Travel time from YVR to Vancouver’s downtown waterfront is only 26 minutes. Okay, the city isn’t THAT far from the airport, but 26 minutes still sounds impressive.

I love YVR, and visit it as often as possible whether I’m travelling or not. Before the Canada Line opened, I had an informal airport car service for my friends jetting off to see the world. I called it “Lisa’s Super Cute Airport Car Service”. My tag line: “You get a smile along the way and a hug at the curb!” Then I'd slip inside and grab a slice of Flying Wedge Pizza to go. My favorite slice: Tropical Pig.

I spend a few hours at YVR every week. It’s become my favorite public place to write. I set up by a window overlooking the infield, have a little breakfast and write. And the wireless Internet connection is free! There’s something about the quiet, steady hum of airport activity that makes it work for me.

And I’m enjoying it right now.