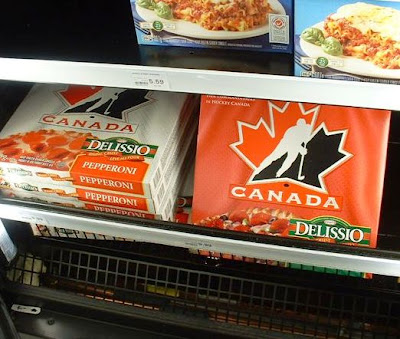 This is like a Tuesday photo, but only it's Wednesday. I wandered the city today and witnessed some post Olympic dismantling: Alberta House is still in the throws of decontruction, with a classic Vancouver saloon underneath just waiting to be freed (that would be the Atlantic Trap and Gill), the Bell Ice Cube, now melted, is but a pile of black metals rods, and although the Olympic Superstore still crazy busy, you can see noticeable empty spaces growing larger on the racks and shelves.

But what is happening to this pizza? The Hockey Canada Frozen Pizza has been relegated to a bottom shelf. Is this not blasphemy? There is a contest on right now until June 30th, 2010...win one of 50 official Team Canada Hockey jerseys visit Delissio Hockey Now to enter!

Four years ago I purchased Hockey Canada puck shaped brownies (they were disgusting) I managed to hang onto them until 2008 (they were lost in a move). I kick myself for not capturing them permanently in a photo. They would have looked great with the pizza.

"Where are you 'smurfin' at'?" Translation...Where is your volunteer assignment?