A Marriage of Crime Scenes, Pucks and Rocks

It appears the USA Network has become a bizarre blend of Police Procedural dramas, Men's Olympic Hockey and Olympic Curling. After being in the United States for almost a year and a half, I've learned that the USA Network is the place to go when you want to watch Law and Order's, NCIS's or CSI's ALL DAY LONG. For now, the binge viewing style network has become a refuge for errant hockey games and curling competitions.

Of course it took me six days of the 2014 Winter Olympics to discover there was this hidden gem of hockey nestled amongst the hard boiled detectives and lab geeks. However, I do have an excuse for my rusty sports viewing skills: I've spent the last year and a half away from sports working on a time consuming project! Heck, my blogging skills are also rusty! I can count the number of blog posts on one hand for the entire year of 2013!

So, in order to assist myself, I am going to list the Men's Hockey Schedule for the USA Network right here in this post...(all times in ET) 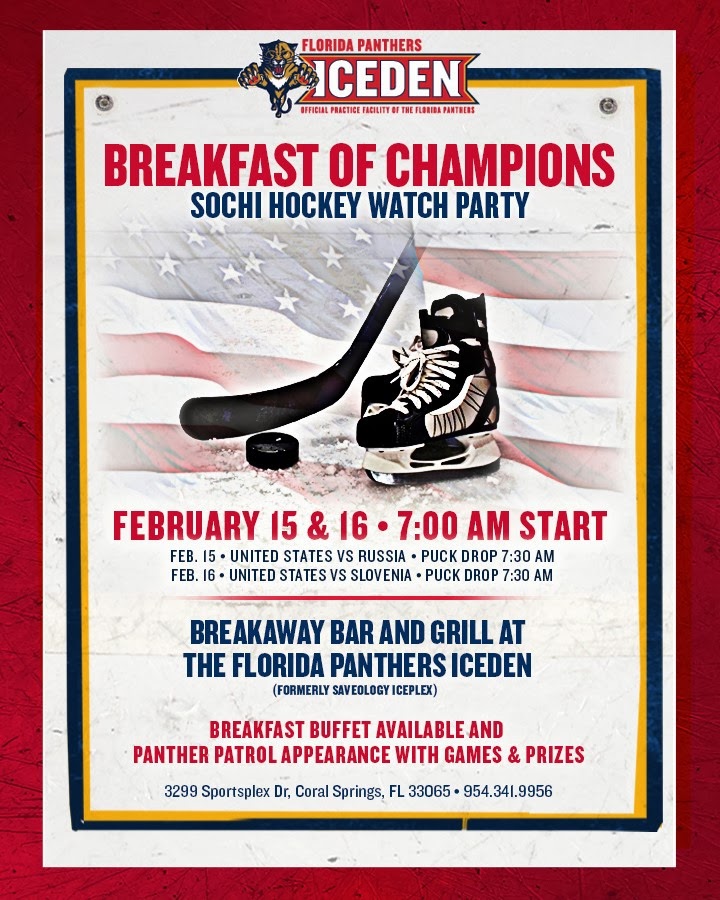 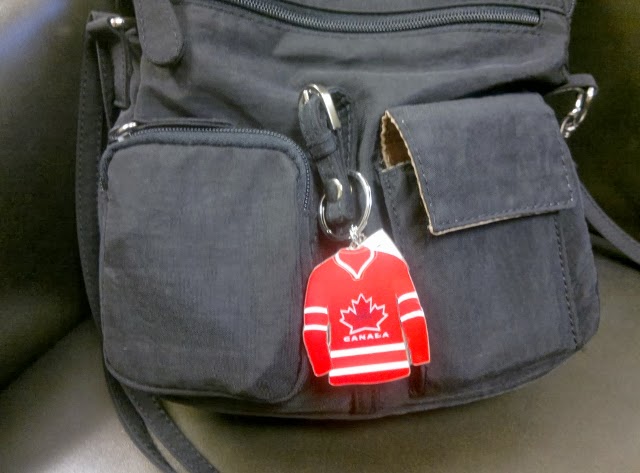 Well,  my Canucks have been knocked out of the Stanley Cup Playoffs, so I now have a little more time on my hands. I was curious about the latest Team Canada Apparel from The Hudson's Bay and decided to have a look. The above t-shirt is definitely my favorite. It's the colorful crest that did it for me. I wasn't able to capture a larger example of it, so please click here to check it out....

It's all about the iconic Canadian imagery! Plus I find the crew neck to be refreshing change from the plunging necklines we often see in NHL clothing for women. The shirt cost $20 and comes in black, white, red or green.

One Year Later: Inside my 2010 Winter Olympics Box of Stuff Well, there it is...my 2010 Winter Olympics Box of  Stuff.  If you are wondering why...please read the column below as an introduction. As you can see, Lisa's Big O stuff  didn't all fit inside. Locating more Olympic stuff in the far reaches of hockeyandhighheels.com's headquarters just didn't fit into the plan, so I strategically placed two: the Holland Heineken House Hat, and one of the many Petro Canada Olympic glasses that I own. 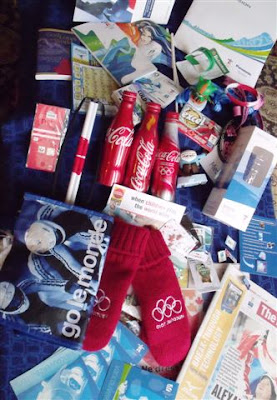 There it is, dumped out onto my 2010 Winter Olympics fleece blanket that conveniently folds up into a small pillow. That 's one item of Olympic stuff that's been frequently used. Some things that aren't used at all... 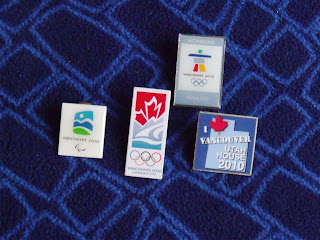 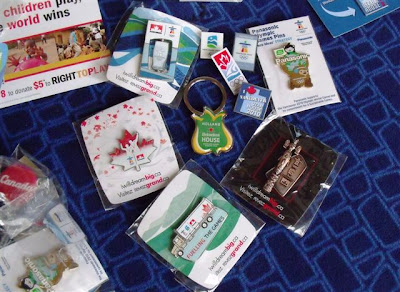 I have a small army of CBC buttons that are in the plastic bag in the bottom corner of the above photo. Those were relatively easy to come by: every time I walked by the CBC's studio I was given one. Don't worry, at the third pin I was protesting, but those cheery "street team people" would have none of it! 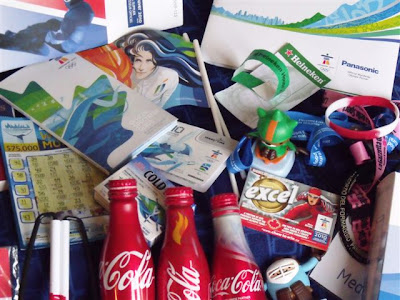 Here you can see more of the paper items, like my Olympic visitor guide, some ticket stubs, various torch relay and hockey game cheering accessories, an Olympic scratch and win (I won $30), an un-chewed pack of Exel gum, and a wrist band and a server's note pad from Holland Heineken House. And speaking of Heineken...look at the hat... 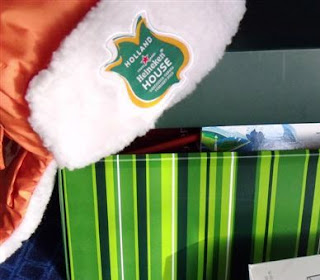 A fabulous hat when you are in a Holland Heineken House and there's an Olympics going on in the background. And, being the hat person I am, I must admit, I have not worn the hat since Feb.19, 2010, the night my friends and I tore it up at Holland Heineken House. In my travels since the Olympics have ended, I have yet to see anyone else wearing this hat. And you know a few of those babies sold - there were only $15.00!

I do like knowing I have the newspaper with Canada's first Gold win on home soil featured on the cover (bottom right corner)... 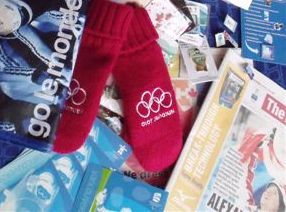 That was a thrill for us Canucks, eh? So was claiming as our own, the hottest winter accessory in recent years...the red Olympic mittens.

I was just at the Hudson's Bay downtown store on Thursday, and they have the new look mittens available... 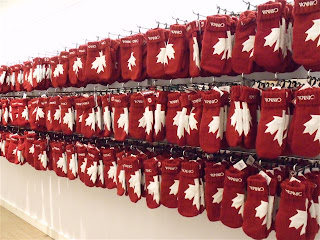 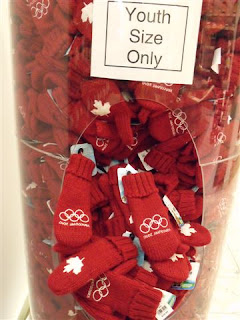 ...and they also have the original mittens, but only for those with small hands.

Oh those mittens! I know I wasn't the only one running around for those. They sold out every day! But I finally hit it on the right day during the last week of the Olympics; had to pick up a pair for my good friend, and fellow hockey writer, Jan Snyder, down there in Houston, Texas. She got them for Christmas. She told me she took them to the NHL's 2011 Winter Classic featuring the Pittsburgh Penguins and the Washington Capitals.  Apparently they kept her brother-in-law's hands warm, because he was one of those guys that arrived unprepared for what turned out to be a chilly evening.

So, everyone, as we'll be bombarded with Vancouver 2010 memories from the local media this coming week, don't forget to drag out you 2010 Winter Olympic Box of Stuff and show the souvenirs, the trinkets and the occasional piece of crap some love.

Piece of crap item not shown above: a flimsy, black ball cap advertising Parmesan cheese. Oh yes. You know you waited in line at the Italian House for that puppy, admit it! ;o)

One Year Later: Looking inside the 2010 Winter Olympics Box of Stuff

I'm sure most everyone in Vancouver has a box on a shelf, full of stuff they accumulated during the 2010 Winter Olympic Games last February. I know I do. The box is in the photo above, acting as a backdrop to one item of stuff: my "Quatchi in Goal" Olympic toy from MacDonald's. Yes, something that I just couldn't live without! But, that was the fever that plenty of locals caught, as we made our way around the city either buying stuff, or opening up our hands to receive the stuff that was being given away. I remember visiting with my cousin, Jen during the Olympics, and she had this tiny coin purse in the shape of Sumi, the Paralympic Games mascot.

less than a week later she would say...

Jen: I don't know why I bought this. What am I going to do with this?

Today it's one week before the one year anniversary and I've opened up my Olympic box of stuff. I'm taking a trip down memory lane. Re-visiting my life, the times and the stuff from those fun filled two weeks in February 2010.

With Glowing Hearts: a Movie Premiere

The one year anniversary of the 2010 Winter Olympics is just a few weeks away. What are your plans to celebrate? Where will you go? What will you do?

A wonderful new documentary film will be screened on Saturday, February 12th, 2011 and I recommend everyone that can fit this into their weekend should do just that.

A very good friend of mine, diector, Andrew Lavigne, along with Animal Mother Films will be screening the final cut of With Glowing Hearts: Vancouver 2010, A Social Media Story at the Simon Fraser University Woodward's Theatre.

Vancouver's 2010 Winter Olympics will go down as many things, and one of those is it truly was the "Social Media Olympics". But this isn't just about how the sponsors and the mainstream media utilized social media tools to get their message out. It's about members of a downtown community, and how they used social media to reach out to the world.

With Glowing Hearts is a film about a revolution, one of social change and a precedent-setting shift in media representation. Vancouver sets the stage for our story about a marginalized community embracing leading-edge communication technologies, to empower, inspire, and break down the digital divide.


So put down your stuffed Quatchi, and that silly "Hockey's Canada's Game" placard for one evening, Saturday, Feb.12th, 2011 in particular, and experience something truly new to the Olympic Movement!
Tickets are Free...yes...FREE. But you need to make a reservation before they run out...