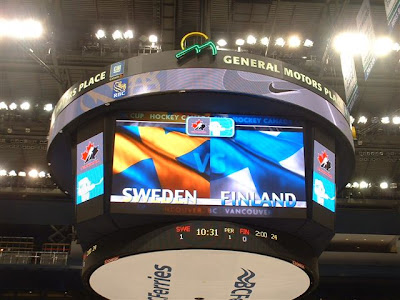 This was my first opportunity to experience a 2010 Winter Games test event. My friend Michelle decided to surprise me with a ticket to one of the games during the Women’s Hockey Tournament at Canada Hockey Place (normally called GM Place, but I’m getting used to the name change for Olympic sponsorship reasons) featuring the best female players from Finland, Sweden, USA and Canada.

In order to boost attendance and bolster the cheering, Michelle chose a week day afternoon game: Finland vs. Sweden. We were two of 1100 in the crowd which definitely favored Team Finland. Michelle, who is quickly becoming an expert on Finland, cheered for them and I yelled for Sweden. My girls won the game 3-1. 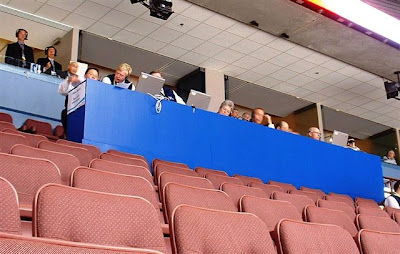 I noted one change to the venue that usually hosts NHL hockey: we sat in the club section, and one row of seats was transformed into a long table, with a variety of officials working away on laptops. Later I found out during the actual Olympic hockey tournaments, the entire club section will be reserved for officials, media, entourages, and hangers on.

So I now know I won’t be seated in the club seats for the one Olympic Men’s hockey game I secured during the lottery last November. People with tickets may not know where their seats are until December/ January when the tickets are delivered. However, I am waiting for an email reply to find out if we’ll know our seat locations before then.

The tourney sparked many debates about whether hitting should be allowed in women’s hockey (currently it’s not).

Sidebar: It’s funny but, whenever a dangerous stuff like fighting and hits causing injury occurs in Men’s hockey, several sports media pundits passionately plead for a ban ons on the rough stuff  in the NHL, the game doesn’t need it blah, blah, blah. This always makes me shake my head. If these guys are so against the rough play in Hockey, then why don’t they watch, talk, analyze and give more media airtime and print space to women’s hockey? One would think... 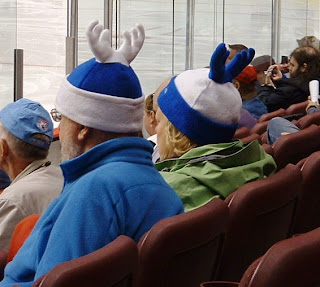 Look what was sitting in our section...the best hat ever. After the game, I asked this couple where they bought the hats. The found the hats at a waterfront market place in Helsinki, Finland. My friend Michelle will be visiting Finland in January. She’s on a mission now. Find that market and if the hats still exist, bring some back to Canada. I’ll report on her progress come January.