A Memory: Backing the Bid 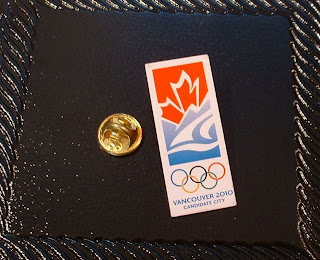 You see this pin? That’s where it all started: a bid to throw the 2010 Winter Olympic Party. I acquired the pin on a city street somewhere. A smiling, happy group of people were handing them out. I thanked them and punctured my purse with it. Then one day I had to put my money where my pin was and vote in a referendum asking Vancouverites if we wanted the Olympics or not.

This vote was for Vancouver city only which probably at the time (Feb 2003) had a population somewhere between 500,000 and 600,000 people. I had plenty of friends and family living outside of city limits seething with jealously that I was a member of this exclusive Olympic voting elite. (Yes, they were seething...I could see it in there eyes.)

On that mild February day I headed over to City Hall and cast my vote, but not before I moved that little pin from my purse’s cell phone pocket up to my lapel. I, along with 134, 764 people voted that day, and 86, 113 of us voted yes. Not the best turn out, but that can happen in Vancouver. Turn outs can be weird. Same with RSVP’ing: people can be so “last minute” here, if they show up at all.

So, this little pin was my very first 2010 Olympic Swag, and if you know me, you will know I am fascinated with sports swag.

Five months later, on July 2nd, 2003, Vancouver/Whistler won the bid, and it was a close race. The 2010 Winter Olympics were all ours. I had stayed up quite late (Canada Day was the day before, and my friend Andrew threw a ripper of a party) and decided to stay up all night to watch the televised Olympic Bid Award Ceremony at 7am. Salzburg, Austria and Peyongchang South Korea looked lovely as the runner ups. I was excited by this news, and that helped get me through the work day. The last thing on my mind that day was logistics, infrastructure, construction, homeless and housing. Oh...and money...can’t forget that!